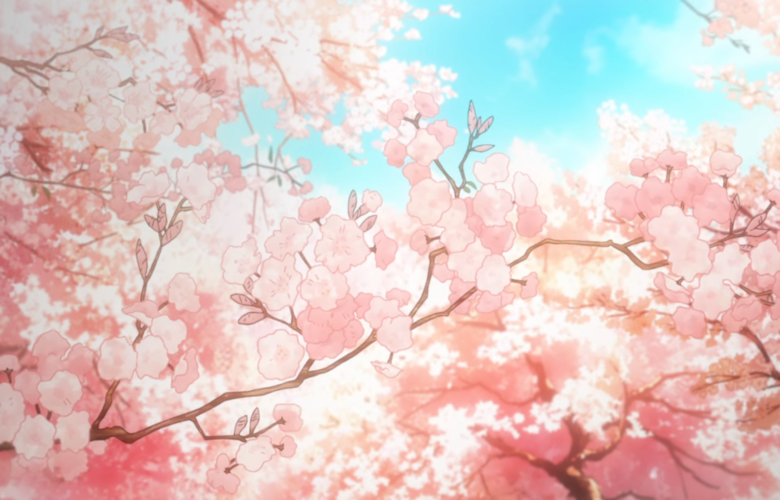 The day is bright and dancing in pastel colours as petals from the ripe cherry trees float by delicately on the wind. Soon, a teenaged boy makes his way along the sidewalk, eating a canelé, then spots a small black cat with bright blue eyes. Without a moment’s hesitation, the boy gives chase and searches out the tiny void to the backdrop of lighthearted music. On a small bench, he finds the creature, kneels in close, and offers it a full canelé with a chipper “nya~” sound.

Click For Thoughts #1
I shouldn’t need to say this, but please don’t feed your cat canelés. Cats are obligate carnivores and the ingredients inside of canelés can be toxic or, worse, fatal.

In the next scene, we are treated to the skilful piano playing of a young girl with her eyes darkened and focused. Her fingers dance across the piano keys with the swiftness of raindrops and a small boy in the audience leans forward with his mouth agape, silently admiring her masterful handling of the daunting instrument. With one quick movement following another, her glasses occasionally capture the light shining down from the ceiling of the great concert hall. The light swallows up the scene and it’s from here that we discover it was all a memory.

Now, a teenage girl sits in a school music room, sticks earbuds inside of her ears, and places her fingers against the heavy ivory keys of the black grand piano. Without playing a single audible note, she maps the sounds onto paper with precision.

Meanwhile, just outside, a teenage boy plays baseball and he’s just hit the ball out of the diamond with great enthusiasm. Much to the boy’s horror, the ball has found its way through the music room window and everyone is telling the boy, Watari, to go get it. A teenage girl who plays soccer nearby cracks a cheeky joke about him “striking out again.”

Once inside the school, Watari runs wild through the halls, stopping only briefly to bid bye-bye to a student leaving for the day. He arrives to find the music room a mess of sheet music and blood from the top of the floored musician’s head. He screams as though he’s just found a corpse and resolves to flee before the girl returns to consciousness.

Thoughts #2
Instead of, you know, helping her. I already took issue with this in the original imagining of this series, but I just can’t understand why they’re trying to play up a character sneaking away from a bleeding, unconscious person as somehow being endearing. It isn’t. It makes the one sneaking away look shallow, uncaring, cowardly, and selfish. None of these are especially endearing traits.

It’s too late. The girl moans softly and reaches for her glasses that have just been brutally knocked from her head. She slowly puts them on and adjusts them to her face as she stares toward the boy who just beaned her with no remorse. Blood oozes down the side of her face. The boy pauses, then says simply, “Thank goodness it’s not someone else.”

Thoughts #3
Already establishing that he’s totally cool with hitting her but not someone else. What an honour. /Sarcasm

The girl, bewildered and disoriented, looks up at the boy and timidly asks when he got there. Upon realizing that the window’s been broken and that her vision is now obscured by blood, she screams with her only focus being on the shattered window. Apparently, it’s not the first time that Watari’s macho egotism has resulted in damaged property.

Thoughts #4
Girl, if I was bleeding out of my head, I’d be calling an ambulance even in the United States!

Watari insists that a slugger is only as good as the number of windows they’ve smashed out. Despite the girl’s suggestion that he should ease up, he argues that he will not without regard for her personal safety. The only thing that matters to him is winning the triple crown. Without further argument, they work together to clean up the music room while the girl, Kaori, groans aloud about apologizing and writing up another report.

Thoughts #5
As though it’s her fault that this one-track meathead won’t listen. As a related aside, people should stop taking responsibility for the toxic behaviours of other people. They will continue their bad behaviour for as long as they think that a) you’ll bail them out or b) they can otherwise get away with it.

Kaori slowly reaches down to pick up one of the glimmering shards of glass. Suddenly, Watari turns on his heel and pulls her hand back, away from the glass, in an uncharacteristic attempt to protect Kaori’s delicate digits from harm. Watari firmly reminds her that it’s dangerous to handle glass and asks, “What if you sliced a finger?” Kaori echoes the question back to him. She, too, is puzzled by the sudden need to protect when Watari paid no heed to her safety before.

Seeing Watari holding Kaori’s hand, Tsubaki pops in the music room window, then snaps a photo with her cell phone and grins ear-to-ear. Afterward, Tsubaki clumsily reveals the two’s history as childhood neighbours and friends and proposes that the two are like a loving husband and wife. Naturally, Kaori and Watari are quick to deny all allegations.

Thoughts #6
Groan. I’m a shipper myself, but these two have been on screen for less than 10 minutes and have zero chemistry. Stop.

Now, we jump ahead and Watari is complaining about the one-hour lecture he received over “some broken glass.” Tsubaki enables Watari by implying that an hour wasn’t that long, but Kaori complains that she was stuck with him and asks Tsubaki to put herself in her shoes. Watari blames the school for having been built in the path of the baseball in the first place, but Tsubaki revels in the idea that the school is close by so that her talents can be admired by all of the boys from the windows.

Then Tsubaki decides that she’s hungry and they travel to the convenience store as a group. Once there, Kaori complains about how she was also yelled at when she had nothing to do with Watari’s shenanigans, but Watari ignores her. Tsubaki mentions the two apology letters that Kaori will also have to write and Kaori’s tone immediately shifts, saying that it will be simple.

Kaori reminisces about being Watari’s babysitter and how it’s second nature to her now. She follows this with examples where things got broken or she got pushed off of a diving board but laughs it off and speaks endearingly about how she thought she would die. Watari tells her to shut it, but Kaori continues, commenting that it’s like having a high-maintenance older brother. Tsubaki commends Kaori for being a good person and Watari has a grumble about it. Tsubaki encourages Kaori not to be too nice because someone will take advantage.

Thoughts #8
She’s already being taken advantage of with apology letters and damage reports for things she didn’t do, but okay.

Tsubaki’s phone buzzes. She looks and her eyes could light up the night sky as she goes boy-crazy over her latest text message. She then excuses herself, leaving Kaori and Watari alone to gossip about how many boys she’s gone through. Watari considers Tsubaki to be positively shallow and wonders what those boys see in her. Kaori defends Tsubaki by reminding Watari that she’s a good person, but Watari proclaims that she is the enemy of all men.

Thoughts #9
I love how that line takes on a weirdly misogynistic flavour when the characters are gender-swapped.

Onward they walk through the soft, misty evening light. Watari chooses to press Kaori about any crushes she may have. When Kaori doesn’t answer, Watari recalls a quote from a fellow student.

Kaori hears the quote and smiles distantly. She’s already resigned herself to the idea that no one will ever fall in love with her. Watari reprimands her for not having the youthful sparkle in her eyes. Kaori argues that her eyes are simply dark, then Watari knocks her for using logic and implies that the point is metaphorical. She’s still a teenager so her eyes should light up and sparkle. Kaori admires Watari’s eyes for being lit up, believing that through his eyes, everything must be colourful, but believes that the same will never be true for her.

Later that evening, Watari asks Kaori when her mother is due to return home. Kaori’s uncertain, but assures Watari that she knows his family will help if needed. However, she also implies that it’s unlikely that she’ll need it since she’s accustomed to being on her own. She bids Watari good night and they part ways. Once out of earshot, Watari accepts a call on his cell phone and apologizes for forgetting to ask something that day, but assures the caller that it will be done tomorrow.

Kaori returns home and eyes the grand piano cast in darkness, covered with books and dust. She then kneels on the floor and softly whispers that she’s home to a small shrine honouring her deceased father.

The next day in class is sombre. All voices are relegated to the background and Kaori finds herself reflecting on the quote shared by Watari just the day before.

We are treated to a moment of a younger Kaori playing the piano while Watari admires from the audience. It was that autumn, when she was just 11 years old, that she could no longer play the piano.